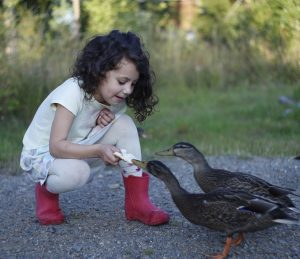 Sensitive children are keen observers of the world, but tend to get overstimulated. They often live intense inner lives and are highly creative, but they are wary of new situations and of people they don’t know.

They also easily intuit the moods of others and feel their pain. This empathy draws their peers and sometimes even adults to confide in sensitive children. Later in life, they often go into helping professions like health care and counseling, where their natural gifts are put to good use.

Roughly one in five children are highly sensitive, according to the research psychologist Elaine Aron, whose 1996 book “The Highly Sensitive Person” popularized the term. Dr. Aron developed a 23-question test, which is often used to help determine whether or not a child is highly sensitive.

Sensitivity is an inborn temperament, she says, that comes hard-wired and remains with highly sensitive people for their whole lives. Michael Pluess, a professor of developmental psychology at Queen Mary University of London, has found that our life experiences, particularly those early in life, also have a big impact.

“We found that about 50 percent of differences in sensitivity between people are due to genetic factors, the other half by environment, including the prenatal environment,” Dr. Pluess said.

He said people fall roughly into three groups: highly sensitive, whom he calls “orchids,” which are beautiful flowers that need very particular environments to thrive; hardy “dandelions,” which can grow virtually anywhere; and a middle group — the largest — “tulips,” which fall somewhere between the two extremes of the sensitivity scale.

He added: “It is important to communicate consistently to the child that their sensitivity isn’t a problem, that it’s a strength so that they can develop a healthy sense of what they can do well.”

But the flip side is that highly sensitive people are also more easily traumatized by painful experiences as children and sometimes by a simple lack of adult understanding.

Teachers who are not familiar with high sensitivity sometimes mistake it for other conditions, including social phobia, autism spectrum disorder or attention deficit hyperactivity disorder.

Sensitivity is also sometimes confused with being shy. While the majority of highly sensitive children are introverts, roughly 30 percent are extroverts, despite their tendency to get easily overstimulated in social situations.

Sometimes you simply need to remove sensitive children from situations that distress them, she said: “Help them accept their beautiful abilities and not to be overstimulated, rather than suppressing their traits with antidepressants or anti-anxiety drugs.”

Excerpted from “Is Your Child an Orchid, a Tulip or a Dandelion?” in The New York Times. Read the full article.