Their Beautiful Minds: The Smart Child Who Struggles 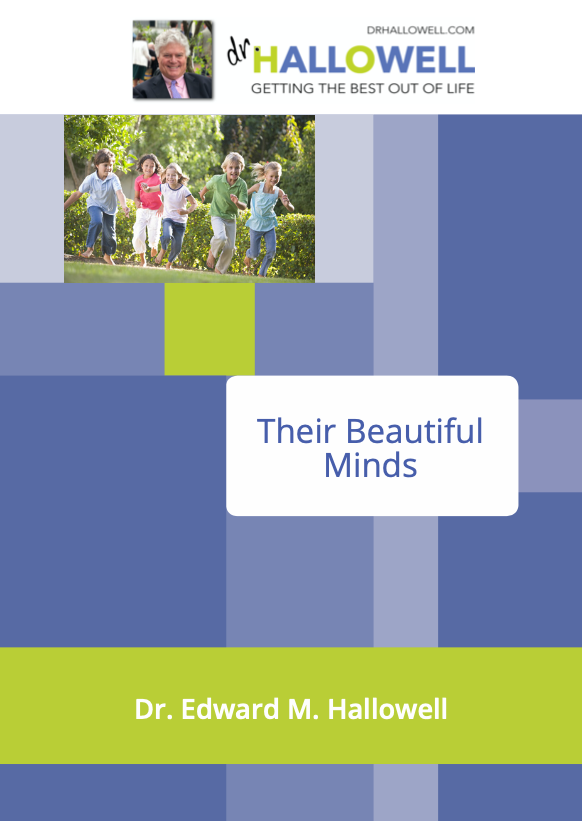 It is time, long since past due, to follow a strengths-based paradigm as we understand children’s minds, especially the minds of those children who struggle to learn. It is time to reject the pathology based model of disabilities, disorders and diseases and replace it with a more comprehensive and neurologically capacious model that emphasizes talents, interests, and strengths as well as the obstacles that get in the way of their developing.

Priscilla Vail, a dear friend and educator who died too young, understood these children so well. She spent her career working with them in various independent schools. She didn’t invoke fancy diagnostic labels and she eschewed the disparaging medical terms. In her book, Smart Kids with School Problems, she simply called them “conundrum children.” They had talent, but they struggled to do school well. “They are not looking for the easy way out,” Priscilla used to say. “They are looking for the right way in. ”It is high time for us to help them find their various right ways in.

I went to high school (Phillips Exeter Academy) with a child who struggled academically. He was several years ahead of me. He recounted his time at Exeter in the following words:

I simply accepted the conventional wisdom of the day. I was a struggling student, therefore I was stupid. I was such a poor student, I needed five years t o p ass t he t hree year foreign-language requirement; and in my fifth year at Exeter in my second “senior” year, I was taking Math III for the second time (I had already taken Math II twice).

I was such a weak student, I passed Latin I with a D and flunked Latin II; then I switched to Spanish, which I barely survived. . .

I wasn’t diagnosed learning disabled or dyslexic at Exeter; I was just plain stupid. I failed a spelling test and was put in a remedial spelling class because I couldn’t learn how to spell. I still can’t spell. I was advised to see the school psychiatrist!

This advice made no sense to me then and it makes no sense to me now but if you were a poor student at Exeter, you would develop such a lasting sense of inferiority that you’d probably be in need of a psychiatrist one day. . . .

The name of this struggling student is John Irving. He went on to become one of the world’s foremost novelists and one of Exeter’s most illustrious alums.

The crucial point is that John Irving is no anomaly. You all have heard the stories of the legions of famous people who struggled in school. One of the great myths many parents buy into is that school performance predicts performance in adult life. It does not. Albert Einstein struggled in school Abraham Lincoln, Harry Truman, William Faulkner, Edward Albee, and Ernest Hemingway didn’t even graduate from college. James Carville, David Neeleman (founder of JetBlue), Clarence Page (Pulitzer Prize winning columnist), and Sharon Wohlmuth (Pulitzer Prize winning photo journalist) all have attention deficit disorder.

And yet, in most schools, and in the hearts and minds of most adults and even children, smart vs. stupid is the gradient upon which a student’s mind and general worth gets measured. If you get good grades, you are smart. If you don’t, you are either stupid or lazy or both. This primitive and inaccurate notion dies hard. While we try to kill it, using all the science we have to refute it, it continues to kill the spirits of millions of children and adults every year.

If it were true, if smart vs. stupid were the best test of a person’s merit and ability to contribute to society, then fine, measure it, and let those who score low suck it up and get used to life at the bottom of life.

But it is not true. How tragic that the worship of this golden calf costs us a great chunk of our most valuable resource: the spunk and verve of our children.
If getting top grades does not predict living the best kind of life, then what does? With what alternative ought we to replace the golden calf?

The predictors of living the best kind of life are not the grades but the attitudes developed during childhood. Attitudes like: confidence, enthusiasm, a strong interest in something, optimism, the ability to persist in the face of disappointment, the ability to ask for help when you need it and give help when it is needed, spunk, a sense of humor, courage, ambition, the ability to take responsibility and to do the right thing when no one is looking, these are the attitudes that actually do predict doing well in life.

Tragically, our current methods of “helping” children who struggle in school make it all but impossible to develop these attitudes. Using our pathology based model, when we diagnose and treat these children, we often inadvertently instill the most dangerous learning disabilities. By far, the most dangerous learning disabilities, what truly holds people back in life, are not ADHD or dyslexia.

The dangerous disabilities are fear, shame, loss of hope, broken confidence, shattered dreams, and a feeling of being less than.

Those are the disablers. Without meaning to, teachers, parents, doctors and other professionals instill these disablers every day in the name of helping children.

The model I advocate is a model that identifies talents and strengths first and foremost, and only then looks at what is getting in the way of developing those talents and strengths. As a psychiatrist who specializes in treating so called learning disabilities like ADD and dyslexia, I do not see myself as treating disabled children but rather as developing champions. I see every child who has ADD or dyslexia as a champion in the making. It is up to me, and all the other adults, to make sure the champion emerges, just as John Irving’s parents did all they could to make sure the champion emerged, with the help of certain angels like, in Irving’s case, his wrestling coach, Ted Seabrooke.

I know whereof I speak. I have both ADD and dyslexia myself, and I wouldn’t trade either for the world. This is because I have learned, in my nearly 30 years of practicing psychiatry, that these “disabled” children are anything but. I think of them as “magnificently minded.”

I have learned that embedded in the learning problem, embedded in the challenged mind, there are precious gems. It is my job, our job, to mine them. It is simply a fact that most people who possess great talent also face great challenges. Think to yourself of the highly talented people you know. How many of them struggle with depression, or an anxiety disorder, or substance abuse, or bi-polar disorder, or ADD, or dyslexia? In fact, it is difficult to find a highly creative person who does not struggle with one of those conditions. But if all they feel is the presence of the negative and never hear about the positive, then they begin to become just the negative.

So it is time to reject the model that emphasizes what’s wrong, disabled, disordered and diseased and replace it with a model that emphasizes what’s right, what’s good, what’s strong. In that context, it becomes far easier to work on the problems, simply because the child and the parents are doing so in a context of hope and enthusiasm. Instead of feeling like a disabled child in need of treatment, the child can feel like a champion in the making, a member of the society of the magnificently minded. That switch in emphasis, I have learned, makes all the difference in the world.

If your child is struggling in school, take heart. His or her learning problem is likely a marker of talent. Sure, there is a struggle. Sure, you worry. Sure, you hate to see your child work hard and get poor grades.

But you can take steps to mine the gems. Be sure you are working with a professional and a school which can help you develop the talent, not just address the problems and struggles. You need to do both simultaneously, develop talent and address short comings but in an atmosphere that is free of shame and fear and full of hope and positive energy.

This is not spin doctoring. This is the truth. This is the method that works the best. The conundrum children Priscilla Vail wrote about are some of our most talented children. But they need special help. Otherwise their talent can go to waste and they can lead lives of chronic underachievement. They usually can’t unwrap their gifts on their own. They need a great teacher, an angel of a coach, a parent who never gives up on them and works as their advocate. They need to know that at least a couple of people believe in them no matter what.

The Power of Sustained Love

The good news is that today we have more ways of unwrapping these children’s gifts than we have ever had before. From medications, to exercise-based treatments, to neurofeedback, to nutritional remedies, to specialized coaching and tutoring, to mindfulness training, we have a vast and potent armamentarium from which to draw.

But I am here to tell you, based on 30 years of real life-in-the-trenches experience, the most potent treatment of all, bar none, is love. Especially love sustained over time. Nothing comes close in its power to bring out the best in a person.

If you have a conundrum child, a member of the society of the magnificently minded, you might feel that I am writing a fairy tale.

You might feel that your child is cursed with a terrible disadvantage. Before you go there, let me warn you that that kind of thinking risks becoming a self-fulfilling prophesy. Your child needs you to believe in him or her no matter what. John Irving’s story, and the legions of others I could tell you about are not fairy tales. They are true.

The power of love sustained over time always leads to improvement. It can be painful to go through the many struggles, but if you keep at it, gradually you will see the champion begin to emerge. Gradually you will see your son or daughter take flight and lead the great life he or she was meant to lead.

It is an heroic journey, both on the part of the child and the parents. And don’t forget the special heroes called teachers and coaches. It won’t happen overnight. There is no quick fix. But work with a doctor and a school that “gets” your child, sees the sparkle, values the positives, and you will find your way to a magnificent life for your magnificently minded child.

Dr. Hallowell is a child and adult psychiatrist, NY Times bestselling author, world-renowned speaker and one of the world’s foremost authorities on ADHD. As the author of 20 books, former faculty member at Harvard Medical School, the founder of the Hallowell Centers and an adult living with ADHD, He has worked with people living with ADHD and mental-health issues for more than 30 years.

Going back to school can be exciting, but it can also be scary. Kids with learning and thinking differences may have added ...

Back-to-School Anxiety in Kids: What to Watch Out For This Year

In a typical year, you might expect your child to have the jitters about going back to school. But this year, back-to-scho ...

Back-to-School: A 4-Week Plan for a Great Start

Download this one-month planner from Understood with daily tips to help your child start the new school year right. ...